Over the season I worked At Eagle Pass Heli Ski lodge as the Masseuse, and part of my roll was to instruct the 6am stretch class with the guests.

From day one I loved the job, Mike had to take off to Hawaii for a month to film Dream Ride 2; turns out we’ll have a handful of long distance episodes for a few years to come. However, it was great timing, I had my new job to adapt to and keep me occupied.

Getting up at 5am took about a week to get used to, one thing I continued to struggle with was the split shifts; some nights I’d be giving massages until 11pm, getting to bed past midnight, then, up again at 5am for stretch class. For awhile midday naps became essential, which didn’t leave as much time for skiing as I’d hoped. The staff were great, and within a few days I already had a nickname, apparently the chefs had misheard my name as Tron;

I’d told them a little bit about my family and they just assumped my parents were some young hippie 80’s kids who called their first child Tron… Not far off haha!! I swiftly claimed the “Mega Tron” status, always followed by the classic super hero air punch.

I wasn’t even one week into work and I got to go heli-skiing. I’d just said bye to all the guests and their guide came running back in. “There’s a free spot, who can take it?”

He asked the chefs, they hadn’t done their training yet, they asked house keeping, she didn’t have her stuff… Finally they turned and asked me.

“Have you done your training?

“Have you got your gear?”

A third and final nod came shaking out, the staff were so stoked for me, leaping up rushing me to my things… “GO MEGA TRON!”

Before I knew it I was in my gear sitting in a helicopter … what just happened, I was still shaking, the adrenal came over me in a flash. 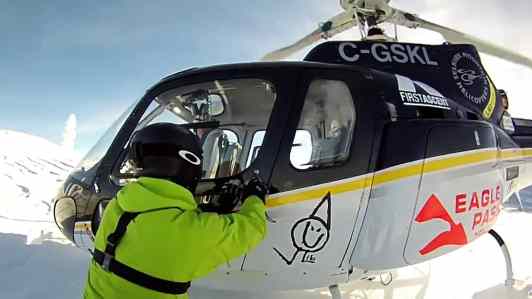 It was an insane day of skiing, luckily one of the guests was my level of skiing, so we stuck together. I had the biggest smile and before I knew it I’d accumulated another nickname; Giggles. As soon as we met up with the other heli group for lunch, my group couldn’t wait to tell them how funny I was: “whatever she does she has the biggest smile, she giggles non stop, even with every crash all you can hear is her giggling, we just started listening out for the giggles to know where she was.”

I had no idea how much I’d been giggling, and I definitely didn’t realize they could all hear me. It was an insane experience and I couldn’t have gone with a better group of guests.

After that experience I was on a mission to improve my skiing ability, if I had another chance I wanted to make sure I was stronger and less likely to hold the guests back. However, for an entire month I went nearly every day skiing at Revelstoke Mountain Resort, but I just got worse and worse and worse. Mike was still in Hawaii, my new ski friends were all boarders so they couldn’t help me. I had zero control, I was crashing on the easiest of things, I’d be cruising down a groomer until … POW!! Right out of the blue I was tumbling down the hill like a washing machine full of shoes… you get me, zero grace, zero coolness. Until this point I’d started to find groomers boring, constantly darting off the tracks and into the trees, it felt so similar to biking: berms, rollers, jumps, ducking through trees – it was biking! Something was up, I couldn’t get down a groomer let alone through the trees. I was starting to dislike skiing, it made me anxious and I started avoiding it, maybe it just wasn’t my jam, I gave it my best shot though. 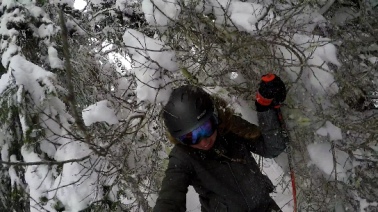 Finally Mike came home and we went skiing, I told him about the issues I was having, something was up, just no idea what. It reminded me of when I first started biking, I knew something was wrong but no idea where the problem was coming from or how to fix it, half the time I’d be horrified to find out my wheel was about to fall off. Now I’m way more in tune with my bike, and if I can’t fix it, I at least know where it stems from. Not with skiing though, even though it seems much simpler… I mean what is there to go wrong? Well I quickly learnt that for an entire month I’d been strapping up my boots the wrong way, such a subtle tweak but made THE WORLD of difference! I instantly felt more controlled, in the biking world it would’ve felt like all my bolts were loose, finally everything is tightened up and ready to go. I couldn’t ski for long that day, it was the first time all season I’d been able to strap my boots up, which means one thing… cramp, lots of cramp.

Now I know I don’t completely suck at skiing I had my zest back. Combined with work and HIIT classes at the gym I was pretty happy with the program I had going on. 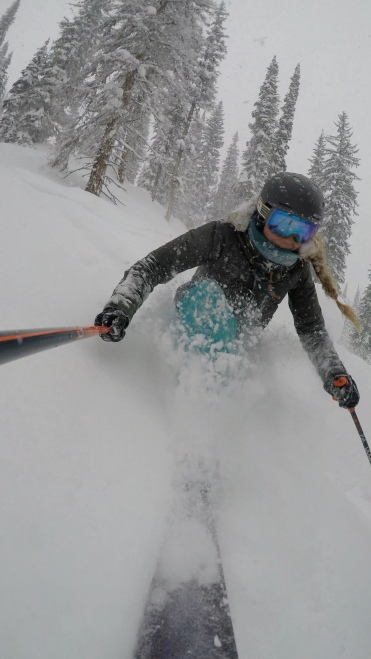 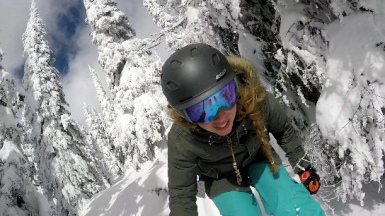